For all of our alumni, the quest for evidence and answers doesn’t stop after Commencement. Some choose to make this activity a profession. You can find them in the field or the lab, using their talents to communicate the importance of their research and engage others in their work. 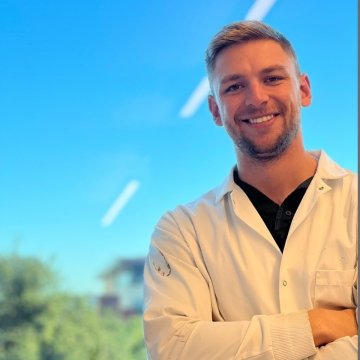 While pursuing his M.D. and Ph.D. at the University of California, San Diego, EJ Curtis ’17 is also studying cancer biology and working in the lab of Dr. Paul Mischel at Stanford University’s Sarafan ChEM-H. Sarafan ChEM H’s mission is to recruit and train clinicians and scientists who span the disciplines of chemistry, engineering, biology, and medicine. As part of the Sarafan ChEM-H community, Curtis is part of a new generation of scientists fluent in multiple scientific languages. The goal is to transform health care by serving as the bridge between knowledge creation in the lab and knowledge application in the clinic. He has also shared his experience with St. Lawrence students in the SLU Connect–San Francisco program. Curtis majored in neuroscience with a minor in chemistry at St. Lawrence. 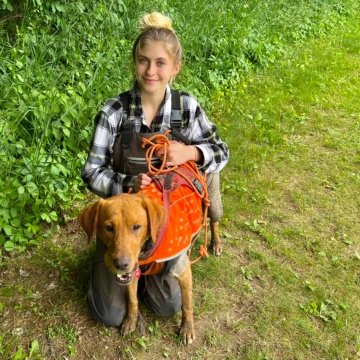 Although technically not a graduate, Julia Sirois ’23 has found her calling. Sirois and her companion, a 3-year-old fox red Labrador retriever named Newt, are working smarter, not harder, in turtle tracking research. In partnership with Newt’s owner and trainer, Kristine Hoffmann, a conservation biology professor at St. Lawrence, Sirois and Newt were able to offer their assistance after learning about a turtle research project underway in Rhode Island. In June 2022, the two traveled to assist in a conservation effort led by the Rhode Island Department of Environmental Management (DEM) in partnership with the Roger Williams Park Zoo, the Rhode Island Natural History Survey, and the University of Rhode Island. “I got to start going to different courses with him, learning more about the importance of the handler in putting him in the right direction of the wind, and understanding how scents and winds move to best set the dog up for success,” explains Sirois. She hopes to continue working with conservation detector dogs after she graduates. 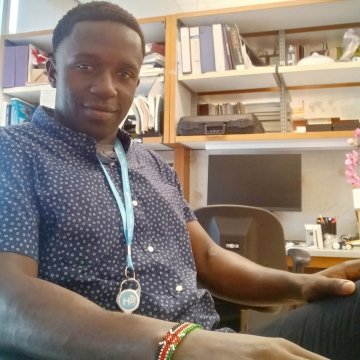 After graduating from St. Lawrence with a major in biology, Arnold Olali ’15 received a Ph.D. in Integrated Biomedical Science from Rush University Medical Center earlier this year. His research primarily focused on HIV and bone health, with multiple publications on NCBI. His most recent publication highlighted changes in bone quality in the context of HIV and combined antiretroviral therapy in people living with HIV. In 2022, Olali moved to Philadelphia, Pennsylvania, to take a position as a postdoctoral research fellow at the Children’s Hospital of Philadelphia but says, “I look forward to a return visit to the Scarlet & Brown.” 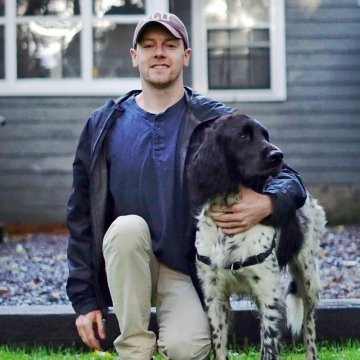 After majoring in biology with a minor in mathematics, Brett Ford ’14 is now a bioinformatics scientist with a background in computational biology, genomics, and conservation and a keen interest in using software development and data science to provide actionable results. Now at Embark Veterinary, Ford is part of a team building tools to predict a dog’s ancestry, enable better veterinary care and health diagnostics, and power new discoveries. Founded in 2015, Embark Veterinary offers DNA testing to curb preventable diseases and increase the life span of dogs by three years within the next decade. The Boston-based dog genetics company just raised $75 million in Series B funding in what the company calls “the biggest Series B for a pet startup to date.” 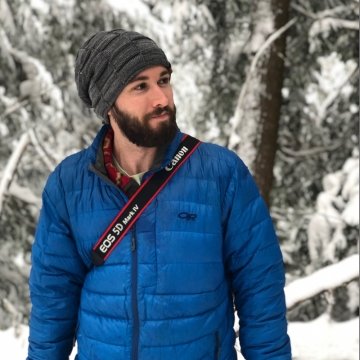 As a science communicator, Justin Dalaba ’16 combines his training as a conservation biologist with his passion for photography to raise awareness of environmental conservation issues. “Science communication is about seeing conservation challenges through the lens of science and translating that message for different audiences,” says Dalaba, communications coordinator at Cornell University’s New York Invasive Species Research Institute. As a visual storyteller, Dalaba shares the work of conservationists and researchers with the general public through creative writing, photography, and videography. Since graduating from St. Lawrence in 2016, several of his photographs have appeared in Fish & Wildlife News and Wild Planet Photo Magazine. His film “Saving Gentle Giants: Whale Sharks” was screened at the International Ocean Film Festival in San Francisco, California.

Lifelong artist Mikayla Quinn '24 was drawn to an internship at the St. Lawrence County Arts Council, where she could use her talents to build community bonds while highlighting and celebrating North Country culture.

Empowering Economic Development as an SLC Chamber of Commerce Intern

Charles Shaw '22 feels that he has found a home in the North Country. After four years at St. Lawrence, he wanted to give back to the surrounding community.