Former Saints Women’s Lacrosse Captain and ROTC Commander Abigail Eberle ’22 was praised for her exemplary leadership on and off the field as a 2022 Yeardley Reynolds Love Unsung Hero Award Winner in an article published by USALaxMagazine.com on May 26.

“Abby has a way of making all feel welcomed, valued, and cared for,” said Saints Head Lacrosse Coach Chelsea Martin.

Eberle double majored in mathematics and statistics at St. Lawrence.

Associate Professor of History Howard Eissenstat used his expertise on Turkey to weigh in on the possible expansion of NATO as a guest on the Washington Time’s History as it Happens podcast that aired on May 26 and in an article published by Paudal.com on May 18.

Eissenstat was also featured in an article examining Turkey’s diplomacy regarding Sweden and Finland’s application to join NATO published by a Dutch media outlet on May 20.

"The uncooperative attitude may be a bargaining tactic," Eissenstat said.

He weighed in on the likelihood of Turkey working with Sweden and Finland in an article published by Politico.com on May 20.

“Turkish officials both think they are morally right in voicing their opposition and believe that they may profit from it. I don't think that this is merely symbolic,” Eissenstat said.“There may well be a way to bring Turkey around, but I fear that diplomats are being overly sanguine about the barriers to agreement.”

Eissenstats's recent work has focused increasingly on contemporary Turkish domestic and foreign policy, especially on issues of rule-of-law, minority rights, and the reshaping of political culture under the Justice and Development Party (AKP). At St. Lawrence, he teaches courses on Middle Eastern history and politics and in the First-Year Seminar (FYS). In addition to traditional academic work, Eissenstat served for over a decade as a Turkey Country Specialist for Amnesty International-USA. He has lectured at the Foreign Service Institute of the U.S. Department of State, the U.S. military, and the Canadian Foreign Service Institute, as well as given testimony to the Canadian Senate and offered briefings to Congressional Committees. 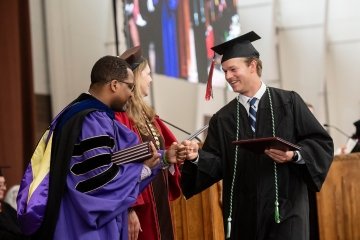 St. Lawrence University’s celebration of the Class of 2022 and honorary degree recipients, and the dedication of Fox Hall in honor of President Emeritus William L. Fox ’75 and Lynn Smith Fox were featured in articles published by NorthCountryNow.com on May 24 and  NNY360.com on May 22.

“To have been able to go through a pandemic, and still kept on pushing, kept on working, kept on striving. And finally we’re here celebrating all of our successes and all of our hard work. So, it’s really impressive,” said Shedrack Bogonko.

Read our story about Commencement 2022.

A. Barton Hepburn Associate Professor of Economics and Co-Chair of Economics Brian Chezum shared how the pandemic may have fundamentally changed workers' attitudes toward minimum-wage labor in an article published by YahooNews.com on May 16.

"Rather than arguing that people are lazier or want a better work-life balance, we should ask what changed so that people are less willing to do those jobs at those wages," Chezum said. "People have pretty well signaled that they're not going to take $10 an hour. Even in Canton, you can't hire very readily for $15 an hour."

Chezum’s research interests include the study of markets in which information conflicts between buyers and sellers. He uses data generated by the thoroughbred racehorse market to examine conflicts of this nature and how the market overcomes such problems.

Visiting Assistant Professor of Education Elisa Van Kirk and Carolyn Holran ’21 shared how St. Lawrence’s peer-counseling program, SHIELD, aims to break the stigma around issues of student-athlete mental health in an op-ed published by InsideHigherEd.com on May 12.

“The goal of SHIELD was to create a safe space for student-athletes to discuss the unique pressure of being a college athlete. It’s the pressure that friends outside athletics might not understand, or that athletes might be ashamed to talk about with a coach, teammate, or trainer.”

Van Kirk holds a doctorate of education in Organizational Leadership from Northeastern University and, after serving as head coach of the Saints softball team from 2012 to 2017, now teaches education courses and in the First-Year Program at St. Lawrence.

Holran was a member of Saints Softball, is a cofounder of SHIELD, and double majored in environmental studies and sociology at St. Lawrence.

Mahoney was a member of the Saint Men’s Lacrosse team and majored in economics at St. Lawrence.

Assistant Professor of Government Mert Kartal weighed in on the threat to Europe and the importance of NATO following Russia’s invasion of Ukraine in an op-ed published by Syracuse.com on April 12.

“With the invasion, Russia has become an existential threat to Europe, and this makes NATO more relevant than it has been since the Cold War," Kartal said.

St. Lawrence has named John Christopher its inaugural Vice President and General Counsel, President Kathyrn A. Morris announced on Aug. 10. Christopher, who will also serve as Secretary of the University Corporation, plans to begin his duties on Sept. 12.