Imagine spending eight full weeks on campus digging into a topic you’re passionate about and getting paid to do it. This is the job of St. Lawrence’s University Fellows: days spent in the lab, library, or the field, collaborating with faculty mentors and asking questions that prompt new discoveries.

About 82% of St. Lawrence students conduct research throughout their time at St. Lawrence. Some do so independently with their faculty advisors, like Rae Dunbar ’23 and Craig Wilkes ’23, while others, like Karina Bellavia ’22 and Kayla Edmunds ’21, work as partners. Their topics range from COVID-19’s effects on funeral directors and mourners to the nocturnal habits of robber flies in St. Lawrence County. Each student shared insights into their recent research process while reflecting on the moments that challenged them and mentors who inspired them.

(Note: responses have been edited for length.) 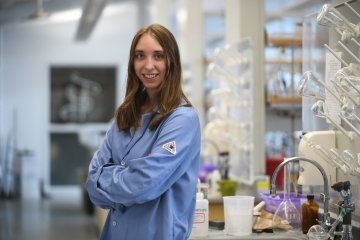 Project Title: “Exploring the Fundamentals of Plastic Degradation: A first step in cleaning up our waters”

How would you describe your research to someone who doesn’t know anything about the topic?

Microplastics are microscopic pieces of plastic that pollute the air, water, and soil. Other studies have shown that these plastic particles are harmful and even deadly when ingested by animals and humans. Their small size makes it difficult to manually remove them from our environment, so our research took a different approach. We spent the semester synthesizing copper cages, which are molecular structures that have a 3D cage-like shape. This cage is based on an enzyme in a fungus that has demonstrated the ability to break down microplastics to carbon and water. Theoretically this cage will trap the microplastics and degrade them to benign components.

I was drawn to this project because I’m invested in the overall goal of tackling plastic pollution, one of the major environmental threats to our planet.

Since we are some of the first people to attempt this method of plastic degradation, a majority of the summer was spent developing a synthetic method for the copper cage. Though we made many attempts, we had trouble finding a method that not only produced our desired product, but also gave us a high enough yield. None of our methods were incredibly successful, but we succeeded in laying the groundwork for future scientists working on this project.

I am proud that before the end of the eight-week session I was able to set up synthesis reactions and use the required tools by myself. I am not a chemistry major and a lot of what I learned over the summer was entirely new to me, so I am pleased that I was able to learn it and become an independent researcher.

What do you consider the most valuable benefit of conducting research as an undergraduate student?

As a scientist, being a researcher is a prominent and commonly chosen career option. Discovering if it’s something you enjoy is a valuable thing to learn sooner rather than later. 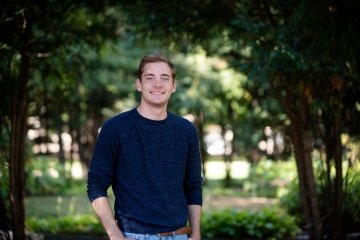 Project Title: “The Effects of the Covid-19 Pandemic on the American Funeral Industry”

How would you describe your research to someone who doesn't know anything about the topic?

I observed the effects of COVID-19 on the funeral industry and the way it has impacted funeral directors and mourners.

I took an Anthropology class called “Dealing with the Dead” my first year with my advisor, Professor Mindy Pitre. I told her I was really interested in some of the material we went over in class, and she helped me determine my research topic.

The pandemic has exposed a lot of flaws in the way we handle death. I’ve also learned about its effects on mourners’ mental health. Funerals are supposed to help people move on. When the pandemic took them away or put restrictions on them, there's evidence that mourners experienced “prolonged grief disorder.” Their grief lasted for a longer period of time because they weren't able to properly move past it.

What's the most rewarding aspect of working closely with a faculty member?

I actually had two faculty mentors—Professors Mindy Pitre and Wendi Haugh. One inspired me because I took her class, and both talked me through choosing my topic. I always had someone to bounce ideas off. It was also reassuring knowing that there was someone helping me keep all of my research, articles, and references organized.

I went into this project with a different topic in mind. As I worked with my advisors and changed my topic, it became more and more interesting. I got a lot of really good information that I wouldn't have if I wasn't curious, and I think that's one of the goals of doing research.

Finish this sentence: “Through my research, I hope to show others that…”

Funeral directors play an important role in helping us process grief. COVID-19 really emphasized their importance, and I don't think that's something that we should take for granted. 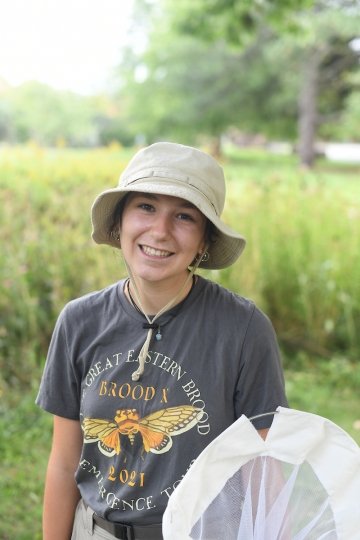 How would you describe your research to someone who doesn't know anything about the topic?

I worked with Kayla Edmunds ’21 on a behavior and ecology study of a robber fly species called Lasiopogon currani. There was virtually no behavioral or ecological information on the genus and species we chose. However, they're super important for the environment because they help regulate the populations of insects like mosquitoes and black flies. I primarily focused on capturing and identifying their prey. I also did a behavioral study, which involved recording them for hours to get a better understanding of how they interact with their own species, other species, and their environment.

I’ve been interested in insects for my entire life. I took Insect Biology with Karl McKnight my sophomore fall and fell in love with the class. It was one of the greatest courses I’ve ever taken and inspired me to do more with insects.

What was it like to be at St. Lawrence conducting research over the summer? Did you get to do anything you don’t typically get to do?

There were still a lot of faculty on campus, so I was able to see almost all my biology professors and everyone that I've worked with over my past three years here. Even though I wasn't doing research with all of them, they were still interested to hear what I was doing on campus and be a part of my time there.

I put my heart and soul into something I really cared about. I was able to catch amazing, beautiful things over video—spending 200 plus hours to capture one specific moment. I was even able to capture a spider eating a robber fly. Previously, we didn’t have evidence that this species of robber fly had any predators. I’m proud that my patience and versatility allowed me to capture material that’s going to make an impact in the world of entomology. 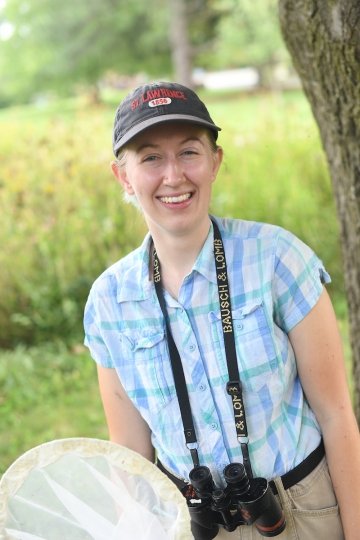 I took Insect Biology with my faculty mentor, Professor Karl McKnight, in the fall of my junior year and became really interested in insects. When Professor McKnight asked if I’d be interested in doing insect research, I jumped at the opportunity. I was supposed to complete this fellowship last summer, but because of COVID I ended up first doing my Senior Year Experience on a different species of robber fly. This encouraged me to continue expanding not only my personal knowledge about the insect but the entire entomology community’s knowledge.

What is the most rewarding aspect of working closely with a faculty mentor?

There are more opportunities to bounce ideas around and be creative with experiments. Professor McKnight was a great faculty mentor because he believes no idea is too outrageous until we find data that does or doesn’t support it. He was really supportive of the ideas Karina and I came up with.

Part of our research was trapping and identifying 50 or more insects every week. This was challenging in both the actual identification aspect, as well as the mental game of sitting in the lab for eight hours a day trying to count the number of antennal segments or decide whether a certain wing vein was curved. A combination of working with Karina and using each other’s knowledge as well as the little victories—coming across a neat insect or finally identifying one we worked on for two hours—kept us going.

What do you consider the most valuable benefit of conducting research as an undergraduate student?

It's a great experience, especially if you’re interested in graduate school. Not only is it a good resume builder, it can also be useful in deciding if research is the path for you. Plus, it’s awesome to feel more connected to faculty and the department you’re working with, which is such an important part of being a Laurentian for life.

Finish this sentence: “Through my research, I hope to show others that…”

The world of insects is so interesting and there is so much still to discover. We’ve barely scratched the surface of our entomological knowledge, so if you’re even somewhat interested in bugs, pursue that curiosity!

St. Lawrence’s new data science major is interdisciplinary, hands-on, and full of opportunities for students to apply their coursework to real-world opportunities like internships and research.

Following a competitive application process, Sarath Novas ’23 has been selected for the Benjamin A. Gilman International Scholarship, an award that will support her off-campus study in London during the Spring 2022 semester.