The Barista: Making Space for 'Safe Saturdays' and More

One of SLU's many theme houses, The Barista, provides space for substance-free events and activities for students.

In 2016, Cheyenne McQuain ’20 and Brady Terry ’20n decided that there needed to be some options—specifically a place students could go to hang out, have some fun, maybe play some games, and socialize—with no pressure to “party.”

“My First-Year Program was split about half and half on drinking. In fact, some people had serious anxiety in settings where alcohol or drugs were present,” says McQuain. “My close friend, Brady, opened his room to the half that did not enjoy drinking.

“We quickly started using this space to do homework, play board games, watch movies and enjoy coffee, tea, and hot chocolate instead of alcohol,” she says. Game and movie nights in common spaces and dorm rooms are not out of the ordinary for any college campus, but McQuain and friends decided they would promote and invite others to join in substance-free events and activities.

“This safe space was quickly named The Barista, since Brady and I would make drinks for the friends coming in,” says McQuain. “One night we were half joking about how we should open this space up more campuswide and I woke up the next morning motivated to do just that.” After petitioning student government in 2017, a new student organization called The Barista was officially established.

According to the National Institute on Alcohol Abuse and Alcoholism, 80 percent of college students in the United States drink alcohol on a regular basis. Learning safe and responsible habits is part of every college and university’s student life programming, and St. Lawrence is no exception. The Barista became a welcomed and effective addition to the campus promotion of healthy lifestyles because it was led by the students themselves.

“Safe Saturdays,” nighttime events that center around different themes chosen by Barista members such as a “Star Wars” movie marathon, ghost stories, or a late-night scavenger hunt, are now a regular part of the weekend options on campus. “First Saturday” events each month have included laser tag, a mocktail sip ‘n’ paint, and a make-your-own winter-themed stuffed animal.

With momentum from the students running The Barista, in 2018, the students petitioned to establish The Lounge theme house which became the first explicitly sober theme house on campus, making it possible for residents along with members of The Barista to expand their calendar of substance-free social and informational events.

Beyond providing social activities and events, The Barista also spreads awareness about the symptoms of substance dependence through talks, photo campaigns, and social media, particularly during substance awareness month each October. In 2021, a different event occurred each day of October and included a “Why do you choose to live a sober lifestyle?” photo campaign, a Halloween costume contest, Tarot readings, and “Tough Talk,” a time where St. Lawrence staff members and students engage in an important dialogue about the substance culture on campus.

McQuain remembers what it was like to feel that independence as a first-year student, and the pressure that can come with college parties. “My hope for The Barista was to balance these two sides,” she says, “by encouraging students to engage in those new and exciting experiences, but to do it safely so that a positive memory can be kept.” 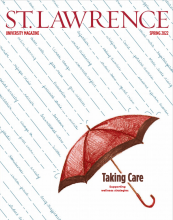 The Bright Side of Darker Days

When daylight hours dwindle, astronomer and Priest Professor of Physics Aileen O’Donoghue says there’s a bright side to be found in the dark.

After spending his first semester of college abroad with St. Lawrence's First-Year Program in London, Blake Bittorf '25 arrived on campus ready to immerse himself in the North Country community.

St. Lawrence University was named to The Princeton Review’s “Best 388 Colleges” list for 2023. Based on results from student surveys, the popular rankings publication also recognized several stand-out aspects of co-curricular and academic life.