A Punch in the Face and the Joys of Sibling Saints

Siblings find the advantages of attending St. Lawrence together.

When the Doin siblings, Ian ’22 and Abby ’24, were young, they would often engage in “fake fights.” Ian recalled an injury that, at the time, probably wasn’t as funny as he remembers it being today.

“We used to fake fight and try to mimic the fighting in action movies,” recalls Ian. “One time I faked a punch, but I didn’t connect and she was like, ‘I wanna try it,’ and she swung and just smashed my face in. She broke my nose!”

The Doins have come a long way from that day, and they have brought their sibling energy to the college level, both competing for the Saints, on the court and on the field. Ian is a kicker on the Saints football team and Abby plays guard for the Saints women’s basketball team.

According to Ben Hutchinson, he and his older brother, Stew, have been bettering each other on the lacrosse field their entire lives. They continue their healthy sibling rivalry at the college level. “Playing in high school with Stew was always awesome,” says Ben. “We played for two years together on our high school varsity team and celebrated a ton of goals and assists to each other. I always wanted to play with him again. So if I had the opportunity to, why not? And right now, we’re playing on the same line and it’s been a lot of fun.”

For the Doin siblings, there was a generational pull as well. Ian was not the first to wear the Scarlet & Brown. Both siblings had grown up hearing stories from their mom, Tina Bradley Doin ’94. Ian had his mind set on St. Lawrence from the start.

“Honestly, I always kind of knew that when I was applying to St. Lawrence, that if I got in, I was going to go. It was always the bar for me,” says Ian, “the way my mom talked about St. Lawrence. Her success was a big part of my decision.” Two years later, Abby felt the same way, and bet it all on St. Lawrence, the only school she applied to.

“I love watching Abby’s games, and it’s been a big reward for me to have her at SLU, because, I mean, she is definitely my best friend. Having her here is a big thing for me,” says Ian, who has long since forgiven his sister for the broken nose. “It’s special, because it’s not going to last forever.” 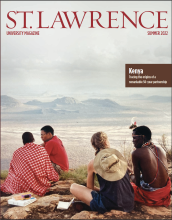