George W. Karpus ’68 was honored during Laurentian Weekend 2022 for his prolific contributions to St. Lawrence University and its Division III athletics program. As alumni, parents, and others came back to enjoy the weekend celebrations, nearly 200 Laurentians gathered for the naming of the George W. Karpus ’68 Atrium.

President Kathryn A. Morris shared during the dedication ceremony that the name is especially fitting for the space: “This is a space that honors the accomplishments of our student-athletes, is a gathering spot for students, coaches, and community members as they visit the Time Out Café, and is truly a gateway into our athletic spaces–Newell Field House and Stafford Fitness Center–named after a few other Laurentian giants.”

As a student, Karpus was a physics major and a member of the Dean’s List and the American Institute of Physics while sharing his knowledge with fellow students as a lab instructor. As a student-athlete, he wore the scarlet and brown for the football team and for the outdoor track and field team. He also participated in both intramural baseball and basketball.  He went on to launch a successful career in commercial banking and finance, and created Karpus Investment Management in 1986. His firm has since merged with City of London Investment Group PLC (CLIG), on whose board he holds a seat.

Karpus has generously given his time through service as a Laurentian in Residence, and hosting former Head Golf Coach Mary Lawrence and the Saints golf team for Spring Break.  And he created the George Karpus ’68 Scholarship Fund at St. Lawrence for students from two high schools in New York’s Southern Tier, including his alma mater Chenango Forks High School.

Members of Karpus’ extended family have also become Laurentians, thanks in large part to his encouragement. Austin Riesenberger ’24, a physics major who plays tight end and defensive line on the football team, spoke of his connection to the space and to the person whose name it bears.

“After walking across campus on countless freezing Canton winter mornings, this Atrium is where I would defrost my eyelashes, stomp the snow off my shoes, and shut out anything in my mind that was taking me out of the moment as I mentally prepared for a workout or morning practice,” he said. “With George being my step-grandfather and mentor, he had a fairly large influence on my decision to come to St. Lawrence. I remember he would tell me that SLU was a place that taught him how to think, in an atmosphere that feels like home. As I continue through my last year at SLU, I can say that I totally agree with what he said.”

Alana Haehl ’25, member of the Saints golf and volleyball teams, said she already spends a lot of time in the Atrium for team meetings, studying, and grabbing a bite to eat at the Time Out Café. Having it named for her Uncle George makes it even more special.

“Since I was young, my uncle taught me that everything in life starts as an idea. While I am still piecing together my St. Lawrence journey and my future, I know that I will always be able to call this place home. And...I can visit this Atrium and be reminded of what can happen—all from just one idea.” 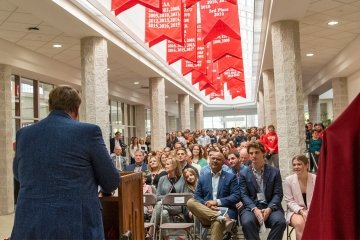 Both Karpus and his wife, Kathy, made the lead gift for Appleton Phase II to enhance the athletics experience for all student-athletes. The George W. Karpus ’68 Athletic Center will include locker rooms and facilities for several men’s and women’s teams. It will also include an expansion of the Michael “Buddy” Cornacchia ’74 Strength and Conditioning Center to prepare Division III student-athletes for competition. Construction will begin once the remaining $4 million is raised for this donor-funded project.

“As I’ve gotten to know George over the past year, I’ve learned that as a student, he truly embraced the liberal arts experience, and he has carried that with him into his professional and volunteer life,” said President Morris. “George has remained engaged with St. Lawrence as an alumnus who cares deeply about ensuring students have opportunities to pursue their interests and passions, whether academic, athletic, or co-curricular.”