In honor of Black History Month, our Laurentians Inspire series for the month of February celebrates Black Laurentians who have made a difference and left their mark on St. Lawrence. 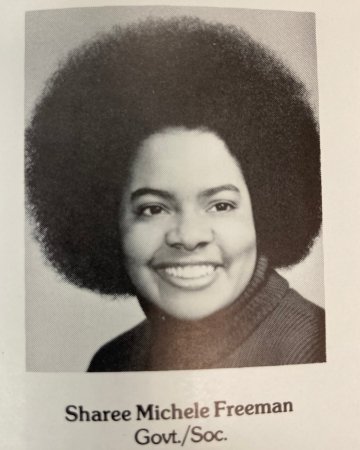 “It was no surprise that at the tender age of 12, I already knew I wanted to be a lawyer and practice civil rights law,” says Sharee Freeman ’76. “While other kids were playing sports and running around with friends during their free time, my mother, who hailed from the Black Flight of African Americans from the Deep South to New York and New England, had us marching and protesting, participating in prayer vigils and rallies organized and hosted by Black churches, and attending live speeches by such charismatic leaders as Malcom X and Shirley Chisholm in Harlem.”

Today, Freeman, who serves as director of the Office of Self Governance in the Indian Affairs Division of the U.S. Department of the Interior, says that the passion for activism that began in her youth flourished during her time at St. Lawrence. As a government and sociology double major, she studied the inequities of many different groups, and witnessed the systemic disadvantages of Native American communities first-hand when she visited the St. Regis Indian Reservation during a class.

“The sense of camaraderie I felt with the members of the St. Regis Tribal Nation has expanded and grown as I have spent much of my career in service to the indigenous peoples of the United States,” she says. Advocacy and activism have been constant themes throughout Freeman’s life and have informed her career in public service as well as her dedication to St. Lawrence community.

As a student at St. Lawrence, Freeman was a member of Pi Beta Phi, vice president of her first-year class, treasurer of the Black Student Union, sang in the gospel choir, worked on the Gridiron, was recognized as a Presidential Scholar, and served on numerous student committees.

After earning her undergraduate degree, Freeman attended Georgetown University Law Center. There, she worked as a law clerk for a Native American non-profit and says she realized the positive impact a career in government could have on disadvantaged citizens.

“I was fiercely independent-minded, opinionated, and fully committed to work for the most vulnerable and mistreated members of society,” she says.

I am inspired daily by the courage of people of color who survive and have survived the indignities of racial and ethnic bigotry and social injustice, yet continue to live dignified, meaningful, and productive lives. As a fully engaged and active participant in life, I am not satisfied to sit on the sidelines or live the life of a withdrawn bystander. —Sharee Freeman '76

Freeman served as legal counsel in numerous government agencies, including four years as full counsel to the House of Representatives Judiciary Committee and six years as director of Community Service Relations in the United States Department of Justice. In 2007, she was named to her current post as director of the Office of Self Governance in the Indian Affairs Division.

Over the years, Freeman has continued the advocacy that shaped her interests as a student and defined her time at St. Lawrence. Throughout her career, she has worked extensively with Indian tribes across the country on issues of civil rights, education, disabilities, housing, welfare, and social services.

“One of the most delightful outcomes from working at Interior has been the opportunity to share my Native American advocacy work with other likeminded public servants,” she says.

Throughout her career in government, Freeman has also been a staunch advocate for racial justice in America. In 2010, Freeman was the recipient of the Leroy Collins Preserver of the Vision Award from the Department of Justice for her dedication to resolving conflict, reducing racial tensions, and restoring goodwill in diverse communities.

“I am inspired daily by the courage of people of color who survive and have survived the indignities of racial and ethnic bigotry and social injustice, yet continue to live dignified, meaningful, and productive lives,” she says. “As a fully engaged and active participant in life, I am not satisfied to sit on the sidelines or live the life of a withdrawn bystander.”

Freeman’s dedication to service is also present on campus, and her expertise has reached many students at St. Lawrence. She has been a mentor for the Laurentians Investing in Networking and Careers (LINC) program, which matches sophomores with a Laurentian mentor to gain networking and industry insight. Freeman has also provided career insight to students in Washington, D.C. Semester Program, connecting with individual students and advising them on everything from career opportunities to business etiquette.

“St. Lawrence consistently aims to establish itself as an agent of positive social change and social justice,” says Freeman, who has served as a University trustee since 2003. She cites the 2014 SLU President’s Commission on Diversity, addition of an Associate Dean for Diversity and Inclusion, and the Laurentian Alumni of Color mentorship program as positive steps taken in recent years. Freeman believes the work of Laurentians supporting other Laurentians is critical, especially in the wake of the social, economic, and political unrest of 2020 and in the midst of navigating the global coronavirus pandemic.

“Being an agent of social justice is not solely the institution’s responsibility or mission,” she says. “Indeed, each active member of the St. Lawrence community must be committed to act as a change agent both on and off campus.”

In our first episode of season two, we hear from Cooper McCrillis '21 whose Laurentian story is anything but normal. In the spring of 2020, Cooper and his classmates went through more than one "once-in-a-lifetime" experience when the COVID-19 Pandemic brought an end to their semester abroad in Kenya.

Each summer, St. Lawrence University offers a dynamic array of courses taught around the world.