Professor of Canadian Studies Joseph Jockel has co-authored a book which analyzes Canada’s involvement in the North Atlantic Treaty Alliance from 1949-2019.

The book, “Canada in NATO, 1949–2019,” was published by McGill-Queens Atlantic Press, which describes it as “the first account of Canada’s military and diplomatic participation in the North Atlantic Treaty Organization over its first seventy years.”

According to the publisher, the book Jockel wrote with Joel J. Sokolsky, the former head of the Royal Military College of Canada, “sheds light on how NATO profoundly shaped Canadian defense and foreign policy, while also serving vital Canadian security and diplomatic interests.” 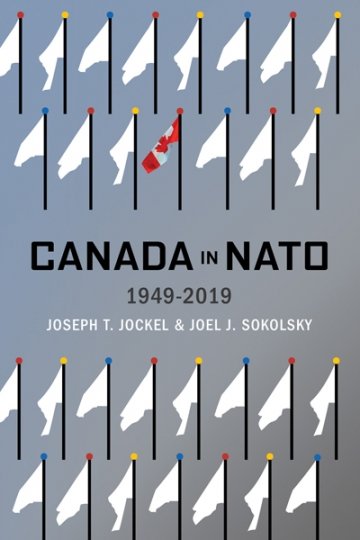 Jockel, who is a 1974 graduate of St. Lawrence University and the author and co-author of several books and many articles on Canadian defense policy and Canada-U.S. relations, served on exchange at the Canada desk of the U.S. Department of State as acting secretary of the Canada-U.S. Permanent Joint Board on Defense, and as a fellow at several academic and research organizations. He is the former president of the Association of Canadian Studies in the United States (ACSUS) and former director of the Canada Project at the Center for Strategic and International Studies in Washington, D.C. He argues that a volume on Canada in NATO has been needed for quite some time.

“NATO and NORAD are Canada’s two most important international defense commitments. I hope readers understand how NATO membership has served Canadian interests, and how Canada used that membership to serve those interests–even though Canada has always been the odd man out in the alliance: neither European nor a great military power.”

Jockel hopes the book will impact classrooms at every academic level. “This will be the first work to turn to” for those who want to research Canada’s military and diplomatic policy, he says.

In a review of the book, Kim Richard Nossal, co-author of  “The Politics of Canadian Foreign Policy” and professor emeritus of Queen's University, wrote that it will be useful in a multitude of areas.

“This book will certainly make a significant contribution to the debate on Canada's role in the North Atlantic Alliance, and will provide a useful reference for policy-makers, security and defence experts, and scholars of international relations."

In addition to graduating first in his class from St. Lawrence, Jockel earned his Ph.D. from the Johns Hopkins University School of Advanced International Studies in Washington and holds a master's degree from the University of Toronto.

The New York Six Liberal Arts Consortium, which includes St. Lawrence University, has been awarded a $1.5 million grant by the Mellon Foundation to create the NY6 Mellon Academic Leadership Fellows Program, a three-year program to provide an intensive leadership experience for faculty in the humanities who aspire to academic leadership roles.