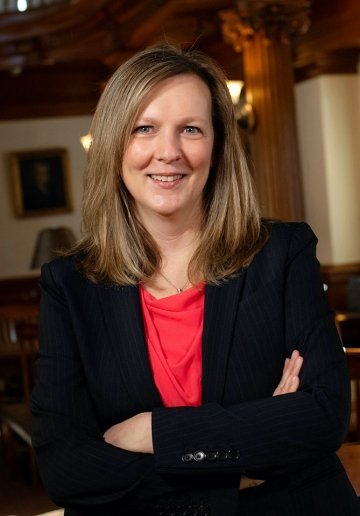 Kathryn A. Morris became the 19th president of St. Lawrence University on July 1, 2021.

President Morris has dedicated her life to higher education and chose to become a professor because she understood the impact of teaching and mentoring on students’ lives. She arrived at St. Lawrence following a distinguished career at Butler University, where she had most recently served as the Provost and Vice President for Academic Affairs for eight years. Prior to her time as provost, President Morris served as a professor of psychology and was chair of that department at Butler. Her areas of expertise include social psychology, the psychology of gender, methodology, and statistics.

In the role of provost, President Morris was responsible for leading six academic colleges, played a critical role in strategic planning, and led two Presidential Commissions on diversity and on sexual assault. At Butler, she helped to drive key institutional priorities including enrollment growth, and launch a $250 million comprehensive campaign. During her final year at Butler, she demonstrated outstanding leadership as a key part of the COVID-19 pandemic response team at Butler and oversaw the development of the “pivot pedagogy” summer program to prepare faculty for the 2020-21 academic year.

She was at the forefront of projects, initiatives, and campaigns that required innovative thinking and affected every member of the Butler community. President Morris helped guide the Butler 2020 strategic plan through development, implementation, and completion, as well as Butler Beyond, the University’s new strategic direction, and comprehensive fundraising campaign. She led initiatives to launch new innovative academic programs at the undergraduate and graduate levels, and was closely involved in efforts that set the stage for a broader and enhanced institutional reputation at Butler, including enrollment management and fundraising initiatives.

President Morris’ deep commitment to diversity, equity, and inclusion is evident in the leadership role she played with Butler’s 2014-2015 Presidential Commission on Diversity, as well as the adoption of a university-wide academic requirement, the campus programming she developed, and the National Science Foundation-funded research on prejudice reduction she enthusiastically pursued while a faculty member. She put a substantive focus on enhancing the representational diversity of the faculty in an effort to create a faculty body that is as racially and ethnically diverse as the student body.

President Morris was a charter member and the first president of Butler's chapter of Phi Beta Kappa and received numerous honors and awards during her time at Butler.

She earned both her master‘s and Ph.D. in social psychology from the University of Texas at Austin and her bachelor’s degree in psychology from Gettysburg College. She has served as a member of the board of trustees at her undergraduate alma mater since 2015.