Professor of World Languages, Cultures, and Media and Coordinator of Asian Studies Zhenjun Zhang recently collaborated with Professor Victor H. Mair of the University of Pennsylvania to publish a book that presents for the first time in English, 10 stories from China’s Ming Dynasty era.

“Ming Dynasty Tales: A Guided Reader,” was published by Bloomsbury Academic which describes it as “casting new light on this significant period in Chinese literary history, these tales bring Ming-era China vividly to life, from its chaotic beginnings to its imperial heyday.” 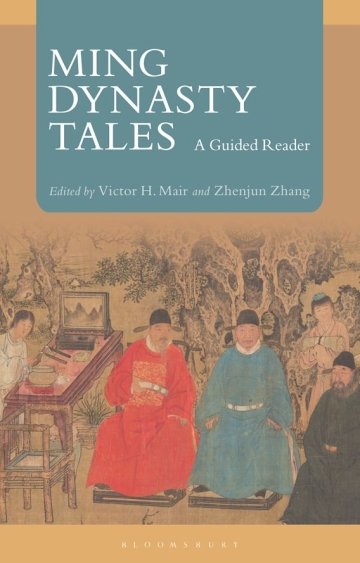 According to the publisher, the collection of stories and accompanying reading guide explores “key themes of war and peace and Confucian values of loyalty, filiality, chastity, and righteousness.”

In a review of the book, William H. Nienhauser, Jr., a professor emeritus of classical Chinese literature at the University of Wisconsin, wrote about the value of translating historical and complex stories.

“This collection provides careful translations and in-depth readings of Ming-dynasty classical tales, a genre that has been neglected heretofore,” Nienhauser said. “Edited by two well-known scholars in the field of traditional fiction, it should convince readers that this neglect has been more the result of the linguistic difficulty of these tales than their intrinsic merits.”

As Zhang’s fifth book on classical Chinese fiction, he hopes to incorporate the work into his Chinese culture course at St. Lawrence.

“I hope this book will help readers to understand the life of ancient China while enjoying the stories,” Zhang said.

Zhang received his Ph.D. at the University of Wisconsin-Madison, his master’s degree at Beijing University, and his bachelor’s degree from Zhengzhou University in China. He has published several books including Buddhism and Tales of the Supernatural in Early Medieval China, Song Dynasty Tales: A Guided Reader, Hidden and Visible Realms: Early Medieval Chinese Tales of the Supernatural and the Fantastic, and Anthology of Tang and Song Tales: The Tang Song chuanqi ju of Lu Xun. At St. Lawrence, Zhang teaches Mandarin Chinese, Chinese Literature and Film, Chinese Culture through Fiction and Film, and Buddhism and Daoism through Literature and Film.

St. Lawrence University has named Brenda Papineau director of Native American Affairs. Papineau, a member of the St. Regis Mohawk Tribe, graduated from St. Lawrence with a bachelor’s degree in sociology in 2002, a master’s in counseling and human development in 2006, and a master’s in educational leadership in 2015.