Statistics Professor and '22 Grad speak in Vancouver, BC

Who won the trade deadline is a frequent discussion for National Hockey League fans every spring.  Recently Claire Dudley presented a poster on her senior honors thesis on estimating a short term answer to this question at the Cascadia Symposium on Statistics in Sports (CASSIS).  CASSIS was held in September in Vancouver, BC and Claire’s advisor, Professor Michael Schuckers, also presented a talk at the conference.

Organized by Simon Fraser University, CASSIS “is a meeting of statisticians and quantitative analysts connected with sports teams, sports media, and universities to discuss common problems of interest in statistical modeling and analysis of sports data.”

Claire’s senior project used Las Vegas gambling odds for each game to estimate every NHL team’s change in team strength before and after the deadline.   In this way, she was able to quantify how gambling markets viewed the impact of trades made before the Trade Deadline.  This deadline is the last point at which teams can obtain a player and have that player eligible for the playoffs.

In addition to any change in a team’s strength at the Trade Deadline, the analysis also estimated predicted difference in team performance at the end of the season based on pre- and post-trade deadline trends.

While at St. Lawrence, Claire was a member of the women’s hockey team, double majored in Psychology and Statistics, and won the Doug Brown Senior Award, an award given annually to two seniors “who exemplify a well-rounded St. Lawrence experience.”  Claire is now a graduate student in data science at Northeastern University.

Here is a picture of Claire in front of her poster. 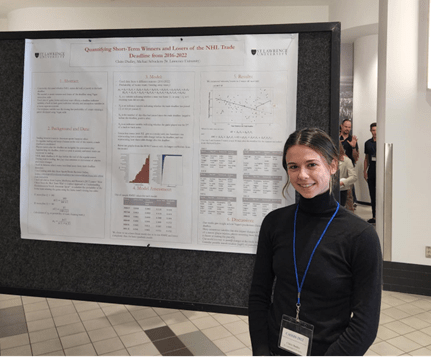 Schuckers’ paper was on the estimation of player performance as a player ages.  That work was joint with Mike Lopez of the National Football League and Brian Macdonald of Yale University.

The title of Schuckers’ paper is “What does not get observed can be used to make age curves stronger: estimating player age curves using regression and imputation.”  A draft of that paper can be found here: https://arxiv.org/abs/2110.14017.

Schuckers presenting his work on player aging curves can be seen in the picture below. 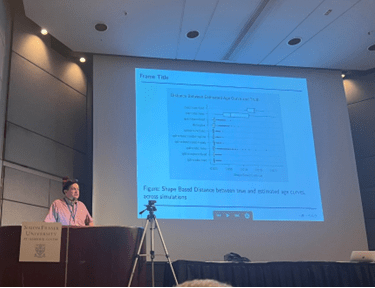 The Frederic Remington Art Museum is pleased to invite student artists at Clarkson University, St. Lawrence University, SUNY Plattsburgh, and SUNY Potsdam to submit entries to the 2023 College Student Juried Art Exhibit. Artworks in all visual media using any combination of materials and techniques are welcome.