St. Lawrence University students facilitated change by advocating for and actively creating the future they believe in during the 2020 election cycle, according to data released in a new report from the Institute for Democracy & Higher Education (IDHE).

Student voting on St. Lawrence University’s campus increased significantly in last year’s presidential election, rising to 70.3% in 2020 from 57.4% in 2016, according to IDHE’s report, released Monday, November 3. The percentage of St. Lawrence students voting was higher than the average voting rate across all participating institutions (66%). 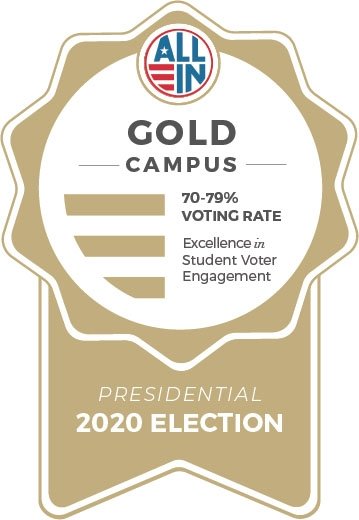 The percentage of students who voted led to the University earning a “Gold Seal” from the ALL IN Campus Democracy Challenge, which honors higher education institutions, educators, and students who increased student voter engagement during the 2020 elections. The challenge is a national, nonpartisan initiative of Civic Nation. The award was announced during ALL IN Challenge Awards Ceremonies, held on Monday, November 8.

Associate Professor and Chair of Anthropology Wendi Haugh and Associate Professor of Computer Science Lisa Torrey served as advisors to an active student group taking part in the Andrew Goodman Foundation’s Vote Everywhere Initiative, a non-partisan project that supports student voter registration. During last year’s election, the duo worked closely with four seniors--Ella Charlesworth ’21, Niamh Creedon-Carey ’21, Bezawit Tefera ’21, and Grace Vensel ’21--who had built experience and confidence in registering, educating and mobilizing voters since their sophomore year. Their efforts led to an 87% St. Lawrence student-voter registration rate, 13.5% higher than in 2016.

“By the time 2020 rolled around, the students were firing on all cylinders, carving out areas of responsibility and making things happen through First-Year Program presentations, tabling in high-traffic areas on campus, social media outreach, engagement with other campus organizations, and transportation to the polls,” says Haugh. “We are now working with a new team from several class years, and we hope to maintain our momentum into the future.”

The group’s efforts played a critical role in the increased number of students who used their voices in the voting booth last year. At the same time in classrooms across campus, faculty prompted students to engage with the issues they cared about most by fostering productive discourse that promoted understanding across the political divide.

Learn How Laurentians Rocked the Vote

Nationwide, the IDHE’s study reported a record-breaking set of findings. On campuses across the country, students built on the momentum swing of 2018 and voted at high rates in the 2020 election, with voter turnout jumping to 66% in last year’s presidential election. The 14 percentage point increase, from 52% turnout in the 2016 election, outpaces that of all Americans, which jumped 6 percentage points from 61% to 67%, according to the U.S. Census Bureau.

“That students, often younger and first-time voters, turned out at rates commensurate with the general public is nothing short of stunning,” said IDHE Director Nancy Thomas. “We attribute this high level of participation to many factors, including student activism on issues such as racial injustice, global climate change and voter suppression, as well as increased efforts by educators to reach students and connect them to the issues and to voting resources.”

St. Lawrence recently received a $10,000 grant from the Council of Independent Colleges (CIC) in support of a public history project that explores feminism in the North Country during the 1970s and 1980s.

Sophomore Leaves Her Mark on COP26

Six years ago, Elise Pierson ’24 attended a youth climate change summit that empowered her to take action in her hometown. Now, she has added participating in the United Nations global climate conference.