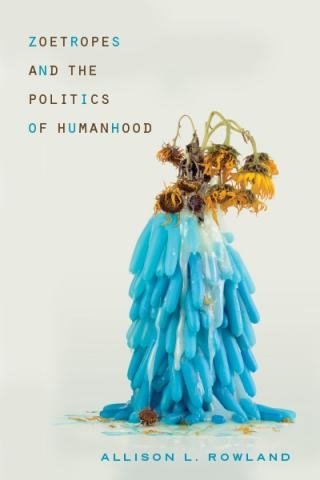 Maurer Associate Professor of Performance and Communication Arts Allison Rowland’s book “Zoetropes and the Politics of Humanhood” has been named a 2021 Rhetoric Society of America (RSA) Book Award finalist. The Book Award recognizes exemplary work in rhetorical studies that has been published by a RSA member in the previous year.

Building on the concept that societies constantly parse populations into worthy lives, subhuman lives, and lives sentenced to death, Rowland, who studies rhetoric and public discourse, explains how the way people talk about living beings impacts their perceived value. Her book focuses specifically on zoetropes—the rhetorical devices and figures that result in such transvaluations. Through a series of case studies, including microbial life at the American Gut Project, fetal life at the National Memorial for the Unborn, and vital human life at two of the nation’s premier fitness centers, and in conversation with cutting-edge theories of race, gender, sexuality, and disability, Rowland’s book brings to light the discursive practices that set the terms for inclusion into humanhood and makes people who they are.

“We have some instances where public discourse is actively working to promote the value of people’s lives and then there are moments in public discourse where the value of people’s lives is demoted,” said Rowland. “My book looks at both of those things together, the raising and the lowering, as two sides of the same coin. I really want to attune people to these moments of evaluation, or these moments of changing the value of someone’s life. They happen everywhere, all the time. Sometimes it’s really obvious and sometimes it’s very subtle or euphemistic. It’s tuning people into these processes that I really see the value of my work, because zoetropes are a matter of life and death.”

The RSA Book Award selection committee reviewed over 30 books covering a number of topics and a range of methods. Rowland’s book, published by Ohio State University Press as part of its New Directions in Rhetoric & Materiality Series, was one of three honorable mentions. It is Rowland’s first book.

During the 106th National Communication Association Annual Convention, rhetoric and communication scholars shared their interpretations of Rowland’s work and the impact her research has on their field.

“This is a very artfully written book and a real pleasure to read,” said Associate Professor of Communication Christopher Ingraham from University of Utah. “(Rowland) is providing a toolkit for us to use different terminology, to use different material-discursive techniques, to then challenge the ways lives are valued in a particular way. (She is) addressing studies of bodies, disability, critical/cultural studies, biopolitics/necropolitics, decoloniality, critical race studies, posthumanism, health, medicine, and of course all of these articulated within the study of rhetoric—and that’s really hard to do. It doesn’t feel artificial, and it doesn’t feel forced.”

Rowland has been at St. Lawrence since 2014 and she teaches courses like Rhetoric and Public Speaking, Gender and Communication, Against Health: Rhetoric & the Health Humanities, Rhetoric of Algorithms, and Sex Talk. She has also taught in the First-Year Program and conducted a First-Year Seminar titled Speak Up!: Rhetoric and Public Speaking. As the Maurer Chair, Rowland oversees a communication across the curriculum program unique to St. Lawrence. She holds a Ph.D. in communication from the University of Colorado-Boulder, a master’s in critical, social, and cultural psychology from the University of Bath in Bath, Great Britain, and a bachelor’s degree in psychology from James Madison University.

Though it was practically predestined, Caroline Fleischauer ’15 didn’t come to St. Lawrence expecting to discover her passion for teaching. Education was always an important value in her family, but Fleischauer was uncertain if it was her calling, too.

Professor of World Languages, Cultures, and Media and Coordinator of Asian Studies Zhenjun Zhang recently collaborated with Professor Victor H. Mair of the University of Pennsylvania to publish a book that presents for the first time in English, 10 stories from China’s Ming Dynasty era.