Class of 2020 Celebrated at Commencement

​​​​​​​It was 442 days in the making, but members of St. Lawrence University’s Class of 2020 were finally able to come back together for the first time since March 2020 for their long-awaited commencement ceremony.

More than 350 graduates returned to campus for the ceremony held on Sunday, August 1, in Newell Field House, with nearly 1,000 people in attendance. 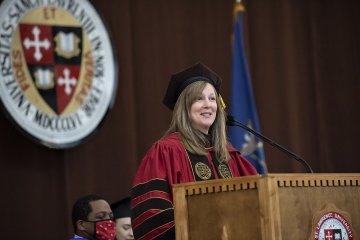 In addition to honoring the graduates, the event also marked the first Commencement for St. Lawrence University President Kathryn A. Morris, whose tenure began on July 1.

“In the months since I was announced as president-elect and in the month since I have served as president, I have learned that Laurentians have a seriousness of purpose, a fierce commitment to community, an adventurous spirit, and a depth of resilience,” Morris said to the graduates. “These characteristics served your graduating class particularly well as you navigated the most challenging times of any set of college students in recent history. Like your families, friends, faculty, and staff, I am proud of your accomplishments and am honored to be here with you today as we recognize and celebrate your graduation.” 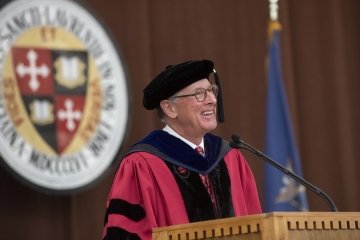 President Morris was joined on stage by President Emeritus William L. Fox ’75, who retired as president on June 30. Fox served as the Class of 2020 Commencement speaker and delivered Sunday’s keynote address, which celebrated the many ways members of the Class of 2020 have been making a difference and pursuing their dreams since May of last year. He also shared one of the important lessons he’s unearthed during COVID-19: “togetherness is not enough.” He told a story of a group of Laurentian women who graduated in the 1970s that recently rallied around their friend who needed a kidney transplant. After everyone was tested on the outside chance one might be a match, one friend proved to be close enough and the two went into surgery together, “the one saving the life of the other.”

“If it were only about togetherness, they could have all gathered by Zoom for stories and cocktails,” President Emeritus Fox said. “But if we are ever able to conquer the despair of loneliness, it will be by means of kindness. That is what we learned. […] The St. Lawrence Class of 2020 has felt, with good reason, varieties of sorrow—unlike other classes—and with similar good reason about staying together, your class has discovered the mission of doing kindness as a life ambition. Trust the lesson—it is all that matters in the end.”

"The St. Lawrence Class of 2020 has felt, with good reason, varieties of sorrow—unlike other classes—and with similar good reason about staying together, your class has discovered the mission of doing kindness as a life ambition." -President Emeritus William L. Fox '75 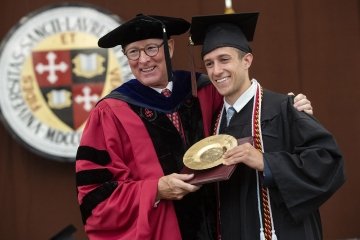 In a ceremony highlighted by inspiring words and songs written by members of the class, several graduates were honored during the event. Brendan Reilly of Bethlehem, Pennsylvania, received the Trustee Academic Achievement Award, which recognizes the graduate with the highest cumulative grade-point average (GPA). Reilly, whose final GPA was 3.985 out of a possible 4.0, majored in Religious Studies and minored in both German and Chinese Studies. This was announced for the first time during Sunday’s ceremony. 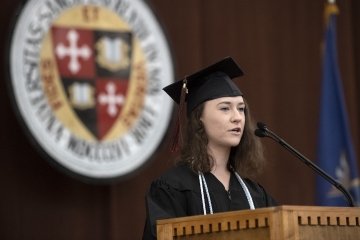 “I’ve seen a group of students enter the workforce during a global pandemic and take my LinkedIn page by storm,” Susko said. “I’ve seen people start careers, and put careers on hold to travel with their best friends. Through the lens of social media, I’ve seen many of you fall in love, adopt your first pet, and even start families. I’ve watched the runners train for marathons, the artists find new mediums, the educators begin shaping minds, and the healthcare workers jump into action with no hesitation to save lives. Above all else, I’ve seen a group of human beings enter into a world on pause, a world that was fragile, and live and breathe resiliency. I’ve seen individuals who understand what it means to appreciate a moment before it’s gone go out into a broken world and plant seeds.”

"I’ve seen a group of human beings enter into a world on pause, a world that was fragile, and live and breathe resiliency. I’ve seen individuals who understand what it means to appreciate a moment before it’s gone go out into a broken world and plant seeds.” -Vivian Susko '20

The Jeffery H. Boyd Class of ’78 Prize, an award that was established by the Board of Trustees in 2018 and recognizes the overall contributions exemplifying leadership on campus made during the college career of a graduating senior, was awarded to Matthew Ramm ’20. Ramm, an Augsbury-North Country Scholar from Ogdensburg, New York, who majored in neuroscience and minored in chemistry, helped many students overcome the academic challenges posed by a rigorous Anatomy and Physiology course. He was a well-known leader on campus and in the local community, where he volunteered to drive the van for his fellow Pre-Health Club members to commute to Maplewood and visit residents at least once a month. Ramm graduated with Phi Beta Kappa honors and is now pursuing professional studies at SUNY Upstate Medical University. 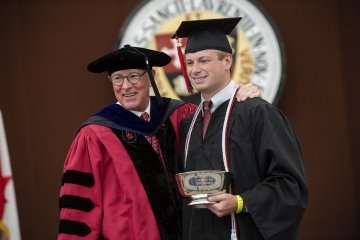 “[Matt] impressed his faculty as a student who had a strong work ethic and innate curiosity,” President Emeritus Fox said. “As a quiet leader, he asked insightful questions of his teachers and always gave classmates the space to voice opinions and contribute to the important dialogues happening every day on this campus.”

In St. Lawrence's Class of 2020, 77 percent of graduates pursued more than one area of study, while 46 percent double or triple majored or pursued a combined interdisciplinary major. In May 2020 when diplomas were mailed to 2020 graduates due to the pandemic, a total of 540 degrees were awarded to members of the class. There were 514 bachelor’s degrees awarded, including 314 Bachelor of Arts degrees and 200 Bachelor of Science degrees, as well as 26 master’s degrees and 5 Certificates of Advanced Studies. The most popular majors for the class, in descending order, were economics, business in the liberal arts, psychology, government, and biology.

Despite graduating during a pandemic, more than 92 percent of St. Lawrence’s Class of 2020 was employed or enrolled in graduate school 7-9 months after graduating. Nearly 1 in 5 graduates are actively pursuing advanced degrees.

In the fall of her senior year, Eleanor Napoli '20 saw a LinkedIn post in the St. Lawrence University group advertising an open position in the Northwestern Mutual Boston Downtown office. Knowing how helpful St. Lawrence alumni are, she felt comfortable connecting directly with Madison Wilcox '14, who authored the post, to learn about how she navigated life after graduation.

St. Lawrence University has received a $10,000 grant from Humanities New York (HNY) in support of the North Country Rights of Nature Project, which will focus on creating a bill of rights to protect the ecosystems of the St. Regis, Grasse, and Raquette Rivers.