Kristin V. Rehder, Through the Narrows: Meditations on an Adirondack River

In the early summer of 2016, I visited an exhibition entitled Fragile Waters, which included noted photographer Dorothy Kerper Monnelly’s black-and-white images of her immediate surroundings, the Ipswich Salt Marsh.  I was transformed by Monnelly’s compositions and her reverence for the environment, but also by her independence as a woman, shooting with an intimate knowledge of the territory in which she lives and works.  Although I had been photographing in color, and digitally, I felt an urge to return to black-and-white film and to explore the meaning of a place I cherish. 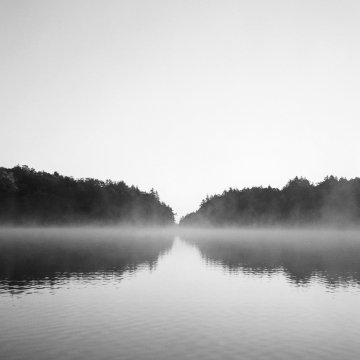 That place is the Oswegatchie River, a 137-mile waterway that flows through northern New York from the Five Ponds Wilderness to the St. Lawrence River.  The name Oswegatchie, or “black water,” comes from the Iroquois.

The Oswegatchie passes through Cranberry Lake, the third largest lake in the Adirondacks.  In 1867, a dam was erected at the lake’s outlet to control flooding and assist downstream mill owners.  The impounded water created numerous “flows.” During parts of the year, I live along what is known as the Inlet Flow.

I chose to photograph with a medium-format Rolleiflex twin lens reflex camera admired for its light weight and ruggedness.  I bought a 1945 second-hand model, having no idea how to use it.  My initial exposures, on Ilford XP2 400 film, were processed and sent to me as scans about ten days after I shot them.  The monitor revealed simple, square, serene pictures on the Oswegatchie.  The photographs had an implication of age, some grittiness, and the candor of black and white. 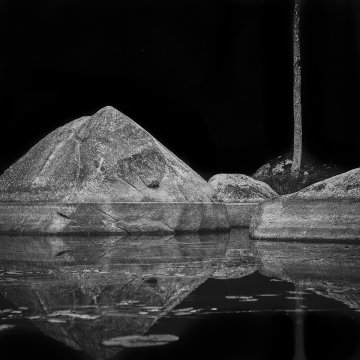 Influenced by my studies in visual ethnography, I moved forward with clear parameters for shooting.  I photographed from my kayak only on the eastern branch of the Oswegatchie, where I regularly paddle or where I could step out of the boat and work from the shoreline.  I used one type of film and one camera, with its original—and by no means pristine—Xenar 1:3.5/75mm lens.

To reach many of the areas where I photographed, I first navigated through a narrows—a channel of water that cuts through metamorphic rock dating back more than 900 million years.  What evolved were visual meditations—a chance to observe the simple gifts of a natural place and to commit to preserving those gifts, and others like it, for future generations.  As the poet Mary Oliver has written, “Attention is the beginning of devotion.” Through the Narrows is an invitation—to see, to reflect, to act. - Kristin V. Rehder

Special thanks to Mariann Garrison-Johnston as science advisor and also to Sara Lee Schupf for her generous support of the exhibition, which traveled to the New York Hall of Science, Queens, NY, in the winter of 2019.