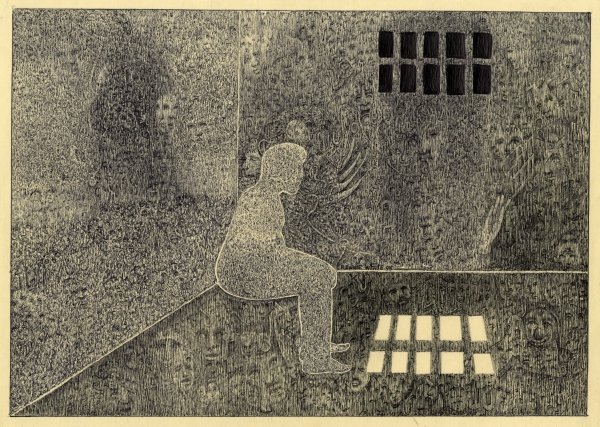 PK: Ronnie White talks about his talent coming from when he was a heroin addict. He is still an addict.

This is a very elegant and simple case study. The title Blending In refers to his being incarcerated since he was a teen. He now has three more years to his 27-year sentence. He is what they call “short.” For him, it is like three minutes. He has lost his family and has grandchildren he has never met.

The drawing is very sterile in a way. "Blending in" refers to when he was going in and out of prison with shorter sentences. He remembers looking at people going to work. He couldn’t imagine how they functioned – how to get a job, drive a car. He feels incapable of living in free society and is deeply affected by being incarcerated. He is at home in jail, blending into that life and environment. He is not separate from it.

Blending in is a surrender to his condition, a peaceful surrender. Other pieces made by prisoners are more wild, with more action – agitated. This piece is even different from anything else he has created.

He is sitting yet not sitting on anything. A chair or cushion would be an object that would be from the outside world and would be out of place. He doesn’t have arms, hands, clothing. He is almost part of the environment, outlined in white like the walls. White lines are not imposed on the drawing; they are negative space. No one told him to do that. His work is intuitive.

In class, I introduced doodling to my students – stressing the importance of moving slowly, without intention. Lines in this drawing are clean, with the pen constantly making small marks. Making circles with his pen, he then can develop that into a face.  He drew at night, working on his own work only then. He earns his living by doing portraits of people and of their pets during the day.

Light and bars is a common motif. That’s the only light in the piece.

CT: There’s a hand on the right, and a tree by his face.

PK: Or puffs of speech or air. We don’t know. It’s very beautiful, elegant. These aren’t usual words used to describe prison art. "Blending in" is a surrender to his condition, a peaceful surrender. Other pieces made by prisoners are more wild, with more action – agitated. This piece is even different from anything else he has created.

PK: Ronnie doodles all the time and works intuitively. His figures are usually twisted and squirming, giving the drawing an active feel. In Blending In, the faces are comparatively calm and quiet, muting the individuality of each face and emphasizing the concept of blending. As when colors are blended, each loses its individual strength.

About Phyllis Kornfeld and Ronnie White:

Phyllis Kornfeld is the author of Cellblock Visions: Prison Art in America, Princeton University Press. She has been working directly with incarcerated men and women from 1982 to the present, in all levels of security—from county jail to maximum security to death row—around the country, providing the transformative experience of creating beautiful art.

Ronnie White, from Fall River, MA, was in one of Phyllis’s art class for a few years at what was then called the Massachusetts Correctional Institution-Cedar Junction, formerly known as MCI-Walpole, a maximum security prison. He is now serving in a facility in a southern state for another 30 years: 15 for attempted escape and 15 for attempted burglary now. Kornfeld notes, "I don’t give away people’s whereabouts, whether they are inside or not, unless they are no longer alive. He never carried a weapon and never killed or hurt anyone. Over the years, he sent artwork to me via USPO. He continues to support himself by drawing portraits of people and pets."